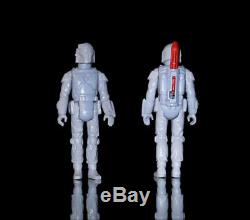 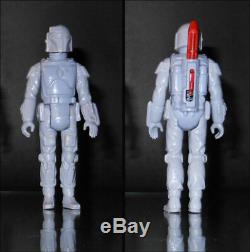 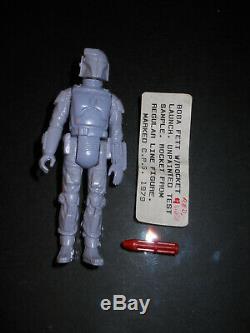 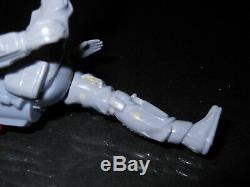 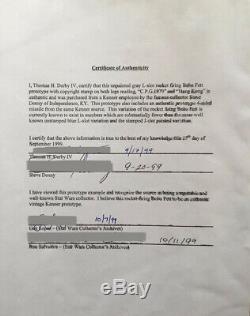 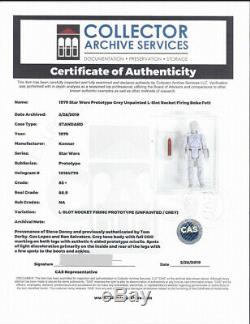 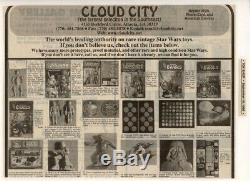 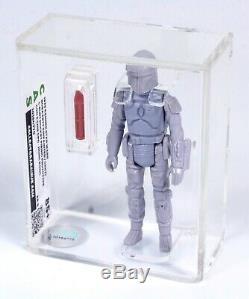 It features the original L-style or L-slot latching configuration, common to the blue/gray first shots of which about 50 - 60 are known. This example however was created in a distinctive gray hue! The exact hue is a bit difficult to pin down as it has a tendency to appear different under different lighting conditions.

Generally the color is best described as a light, sometimes whitish gray much lighter and more distinct in shade than the gray used on the succeeding J-slot engineering pilots sent to Kenner for safety testing. When photographed, the figure tends to display a slightly faint purple hue. This was prior to the L-slot design being modified to the J-slot configuration in an attempt to make the toy safer for children. However, since the engineering pilot term cant be firmly applied without proper supporting documentation, this opinion must remain conjecture.

However, this could explain why only three of these examples have ever surfaced. All three known examples of these Unpainted Gray COO marked L-slot Rocket Fetts can be traced back to one source: veteran collector Steve Denny. This exact figure was first publicized for sale in ToyShop magazine in 1999. It has since had only two owners.

Steve Denny, along with other hobby experts, Tom Derby, Gus Lopez and Ron Salvatore have each attached their names to the original 1999 document authenticating the figure. I have personally made an examination of the figure and compared it to my own example one of the three found by Steve Denny, and believe that this example is indeed the same figure referenced in the accompanying document. Based on a direct side-by-side comparison between the two and images taken of the third, there are some clear traits that these three examples share. Some of the more obvious are the heavy part lines to the helmet and slight melt marks to the front of both legs at where the belt is sculpted. Also, the three examples each have some small areas of white and tan bleaching either due to some impurity or degrading characteristics of the plastic.

The interior tooling for the L-slot appears slightly modified too; appearing more refined with no interior groove at the latch. Condition wise, the 3 3/4" figure and 1" missile have collectively been assessed by CAS at an impressive 85+. The grade is a testament to the figures remarkable state of preservation with tight libs.

The main restraint on the grade is reflective of the white/tan discoloration to the inside of the left leg; a trait that doesnt show much from the front. J-slot Engineering Pilot - 24 examples known - 200K+. Im told the price on that was profoundly above the prices mentioned above.

This will have to be assessed on a state by state basis post sale. Be sure to review the companies E-bay About Me. Page, for additional background and details of services provided to our customers. Please call before returning any merchandise. The item "1979 Kenner Star Wars Rocket Firing Boba Fett L- slot First Shot Prototype CAS" is in sale since Saturday, May 11, 2019.