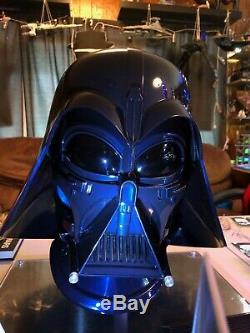 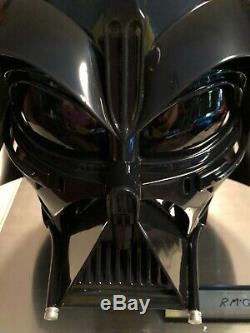 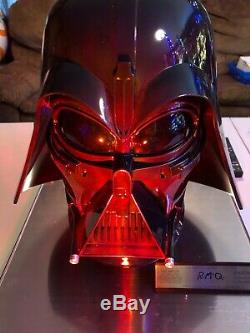 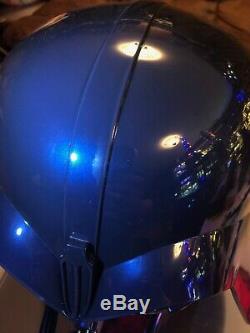 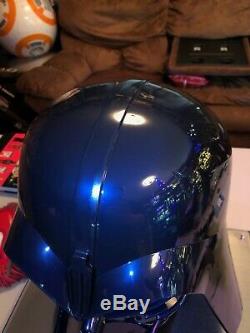 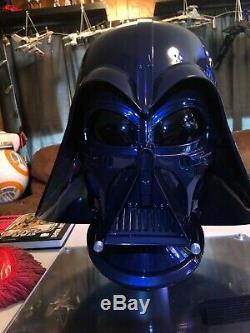 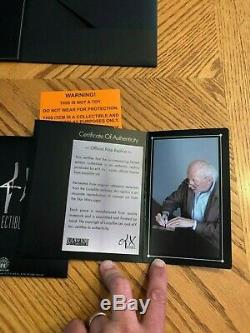 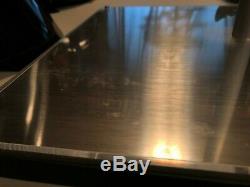 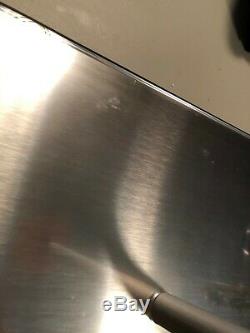 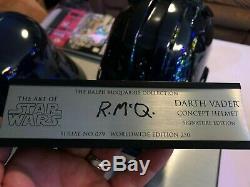 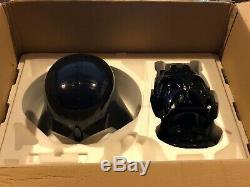 This was Ralph McQuarrie's vision in his early concept drawings, as opposed to Vader's black. Armor that we are all familiar with. It still finds its way into the display case somehow. I did my best to gently Clean the dust. From the face mask and helmet. It could probably benefit from another detail cleaning. Please read the following very carefully and see the picture of the damage to the rear neck brace. This can not be seen at all from the front while displayed on the stand. NOTE:The small back neck brace arrived with some cracks and damage, this however does not affect the helmet on the display stand in any way.

This is a leather lined high end collectible helmet, and has never been worn, ever. This is an extremely RARE (no exaggeration here), highly coveted Darth Vader Helmet, made by eFx under license from Lucasfilm Ltd.

If it doesnt look quite like what you remember seeing in the movies, its because this is the look of Darth Vader as conceived and illustrated by Ralph McQuarrie under direction of George Lucas, which helped to bring about the look ultimately refined by John Mollo and sculpted by Brian Muir. The Darth Vader conceptual Helmet you see here was digitally realized by veteran sculptor Jay Kushwara, with the approval of Ralph McQuarrie. (Kushwara also sculpted the highly praised Animated Series Batmobile for DC Collectibles). Unlike the familiar Black (and yes gunmetal grey) Vader we are all used to seeing, the color on this concept helmet appears as a dark metal flake BLUE that comes out beautifully in light just like the original painting!

McQuarries illustration of Darth Vader, which was also the cover art for the first novelization of Star Wars, is shown in the pix for comparison. A numbered metal plaque, with plaque holder, (#79 out of 250) which is hand Signed RMcQ by the late great Ralph McQuarrie, accompanies this set. Darth Vader, or McVader, as he was affectionately called by the producing team, comes complete with all paperwork and packaging. Pictures are of the actual helmet in this listing. Good luck to those hunting for this Grail!

Please see all pics for best and most accurate condition. Stored away from sunlight in a non smoking home, in a case with glass door. The item "2010 EFX Star Wars Ralph McQuarrie Darth Vader Concept Helmet # 79 of 250" is in sale since Saturday, February 8, 2020. This item is in the category "Collectibles\Science Fiction & Horror\Star Wars Collectibles\Other Star Wars Collectibles". The seller is "stikks02" and is located in Warren, Ohio. This item can be shipped to United States.