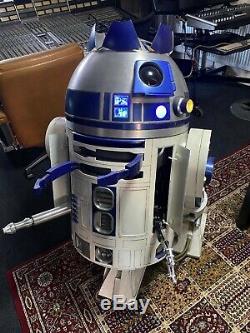 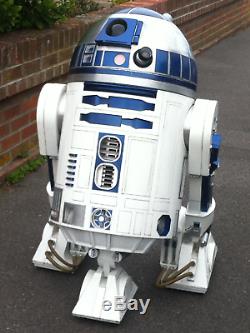 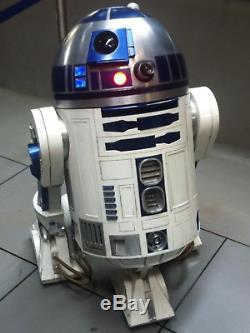 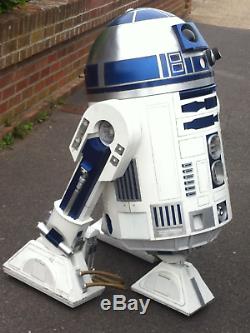 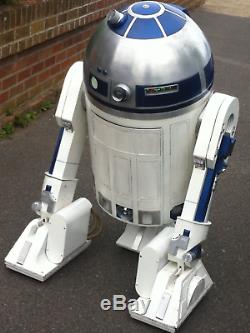 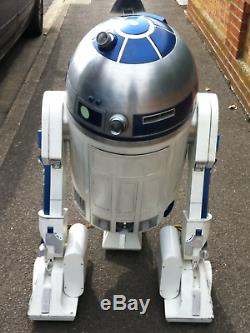 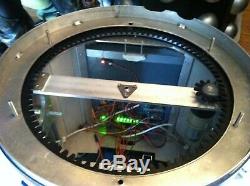 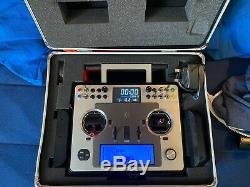 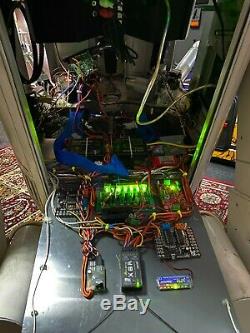 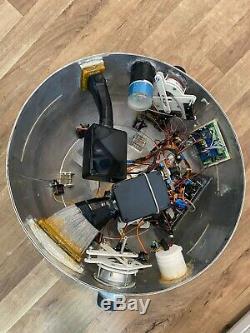 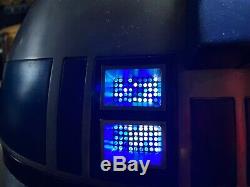 Extremely heavy, I can only just lift it a few inches off the ground. A fully working screen accurate R2-D2 droid. He is of metal construction. Highly accurate, all parts are of perfect dimensions with the measurements and some parts actually taken from original props. The Logic Displays use the correct original Fibre Optics (not LED arrays), these were originally fitted to an original ESB R2 prop.

High end 20 channel 2.4ghz telemetry remote. This is as good as it gets.. Everything below is functional by Radio Control. Head rotation full 360 spin due to electronic slip ring. Seven servo operated opening doors and hatches on body and head.

Utility arm flips out and the probe spins. Grabber claw Flips out and can grab objects (metal too). Blue Flipper arms flip out.

Blue radar eye from original ESB R2-D2 mould. History of this prop, its builder and the build. In 2004 I was approached by Norman and. Paul Harrison of Elstree Props (Formerly Norank Engineering, based in Elstree Film Studios). They asked if I would like to build two original fibreglass R2-D2 units from a collection of original parts found in a container at their Elstree store.

They were screen used Fibreglass droids made for Empire Strikes Back. However they were in a very stripped down state. A New Hope was the only film that actually used metal R2 droids, subsequent films used fibreglass props to save costs, time and weight. At the end of filming, the props along with many others, (seven R2s in total according to Norman Harrison) were dismantled, apparently due to the UK union law not allowing the re use of props or costumes for future sequels to keep people in jobs. They would have to make them again.

So when the parts were found in 2004 they decided to have them rebuilt back to their former glory and was a project I spent over a year on. I was allowed to keep the left over original parts which I went on to use in the build of my own personal R2 offered here for sale, the most prominent parts being the fibre optic logic displays, outer leg details, front holo eye, 3 holo eye lenses (EMA) and two greeblies (EMA domes) found on the rear of the dome. I also had the advantage of having the originals here plus rare photos from Norman to make my R2 as accurate as possible. I based this droid on the very first used film which has subtle differences to the droids used in the sequels.

The main being the leg shoulder horseshoe detail is reversed, there are curved markings around the feet, the black holo eye and one silver panel on the dome. Totally correct to the first R2! I believe one of the original R2-D2s I rebuilt is still owned by the Harrison family and gets used for events and was often used to entertain the crowds of Big Brother prior to them closing the business. Norman Harrison was the owner of Norank Engineering, the company was based on the Elstree lot who built props for Star Wars, Indiana Jones and numerous Bond movies. When Norman retired from film work he opened the company Elstree Props in the studio lot, offering the sale and authentication of film and TV props. So there you have it, the rare chance to own the best metal fully functioning R2-D2 to be offered for sale. The item "R2-D2 R2D2 LIFE SIZE METAL FULL WORKING STAR WARS MOVIE FILM TV PROP DROID RARE" is in sale since Saturday, June 20, 2020. This item is in the category "Collectables\Science Fiction Collectables\Star Wars Collectables\Other Star Wars Collectables". The seller is "fell-rebe" and is located in Southampton. This item can be shipped worldwide.