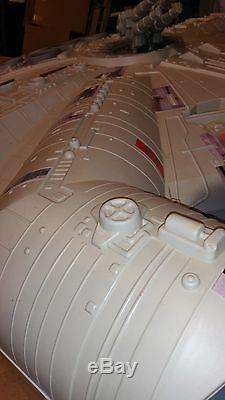 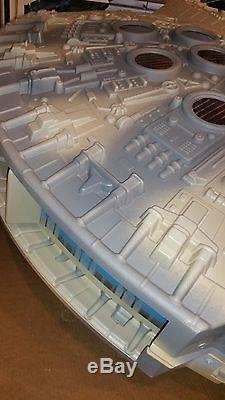 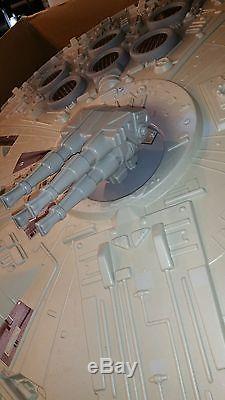 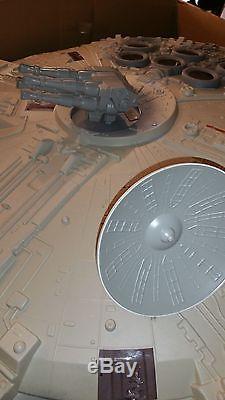 Up for sale: The "MILLENNIUM FALCON EXTRAORDINAIRE" #684 (of 700 rumor is less than 500 and few as in great shape). Also at the time of listing this is the only one up for sale. These ships were seen hanging from the ceilings of Toy R Us stores back in 1997 during the re-release of the Star Wars Trilogy.

In late 1997, Toys R Us held a nationwide charity raffle, giving away 500 of the existing "Extraordinaire" Falcons. I received this unit in 1997 and have been the sole original owner. All original decals that it came with were imaged and restored and has some of the most stickers I have ever seen on the best of those that I have seen. All original decals are included. So you have both the original decals and restored decals in case anything happens to them you can replace them with the originals or restored decals. Please note that the cockpit and the exhaust decals were not replicated as they were fastened securely which is not the case unfortunately for the other decals whereby most of these models are missing several decals as they hung in the department stores and were simply lost. When looking for this item there are several important things to consider. 1 Condition (physical and fading) (This item has been in storage within its original box more than 99.9% time of my possession). 2 Decal quality and quantity (As Stated above). 3 Includes Original radar and two gun turrets. 4 Lights are in working order and includes power supply (This one does). 5 Includes original hanging equipment and wires (This one does). Making this piece very rare. It Measures 72" long and 60" wide. Both turret guns and the radar dish are included.. Has the original hanging hardware. The LEDs appear to be in great shape.

MILLENNIUM FALCON "Extraordinaire" with lights, Radar Dish, and Twin quad laser cannons (dorsal AND ventral) is a direct "tool-up" of Kenner / Hasbro's various toy Falcons. The "Extraordinaire" is a close approximation of the Millennium Falcon's true size if it were correctly scaled for the 3.75 inch scale figures! These were made of sturdy styrene plastic, and have all of the same details, deco, and decals as Hasbro's 1995 POTFII Falcon. There were ONLY (approximately) 700 of these made for display in Toys R Us stores around the country. Each one had a numbered, engraved brass plaque bolted to the circular gun-port area of the dorsal quad-laser cannon.

These Falcons could be seen hanging from the ceilings of Toy R Us stores back in 1997 during the height of the release of the STAR WARS Trilogy, Special Edition. Out of the 700 that were made, a (smaller) undetermined number of them survived their months of display in the nation's various Toys R Us stores as MINT specimens. Any missing or broken parts Laser Cannons, Radar Dish, Power pack. That means that quite a few raffle winners got "Extraordinaire" Falcons that were beat-up, dirty, and / or with missing parts. Now, some of those winners were fortunate enough to know that they should contact Hasbro and request replacement parts. I know of at least ONE "Extraordinaire" owner that did just THAT back in 1998, and got his replacement parts! But, everyone else was outta luck. The item "Star Wars Display MILLENNIUM FALCON EXTRAORDINAIRE #684 (of 700)" is in sale since Sunday, August 27, 2017. This item is in the category "Collectibles\Science Fiction & Horror\Star Wars\Products, Non-Film Specific\Other Star Wars Collectibles". The seller is "lorenzospahn" and is located in Lisle, Illinois.

This item can't be shipped, the buyer must pick up the item.